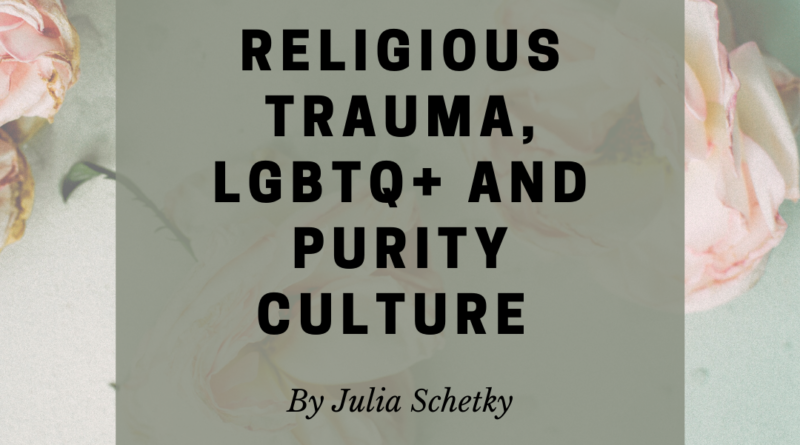 Religious trauma can be categorized as abuse because of who you are as well. For example, if a person is LGBTQ+, they may feel not welcomed in churches because of their stance on marriage. These views can be especially harmful during critical points in a person’s life (such as when a person comes out, or is looking to develop a relationship.)

Another example of spiritual abuse can occur because of the purity culture within the church. (Side note, this section is very binary). Often (stereotypically) the women are asked to “cover-up” or wear conservative clothing to not lead men astray. This implies that women are responsible for the actions of men, and that men cannot be held accountable for their own actions. Women are often held to a higher standard than men in this area, as far as needing to remain sexually pure.

An example of this double standard is the passing of the rose activity in church. A rose is passed through the entire group, and by the time if gets back, it is broken and ruined. The pastor will state, “now is that what you want your marriage to be like, to have a woman who has experienced so many partners that all you have left for you is a broken rose?” Another example is a paper ripped in half every time a woman is with a man (even dating/kissing). Each time the paper is ripped in half, there is “less and less” for her potential husband.

Going back to the LGBTQ+ community, these binary expectations exclude LGBTQ+ community because it reinforces the binary and accepted way of marriage (man and a woman). This shunning practice is harmful not only because it omits non-traditional relationships, but also because of the inherent harm of purity culture.

Click here to learn more about the author, Julia Schetky