We have Codependency videos for sale, which are available on our Videos page.

Also know as Co-Addiction, codependency is often misunderstood as to what it is and what the term means.  The term is over used, often incorrectly, in popular culture, TV and movies.  Codependency simply means that you are a person who, now or in the past, has lived with someone who has an addiction or any significant personal characteristic that impacts others. Living with an addict is the classic example, however there are many conditions that bring about a codependent manner of responding. For example, living with someone who is very controlling, mentally ill, disabled, or has any condition that impacts others can create codependency.  Living with someone who has an impactful condition REQUIRES a method of coping!  The primary coping method used by codependents is, believing they are responsible for others feelings, behaviors, thoughts, and ultimately their conditions and situations. The coping methods used, especially if from childhood, become a way of being in all relationships.  This way of being becomes destructive to the health of the relationship and all people involved in the relationship. This happens without the codependent person knowing that they are causing themselves and others difficulty. Untreated codependency often results in broken relationships, depression, anxiety, extreme burnout, irritability, chronic resentment and responding to life’s situations from a victim stance instead of an empowered position. 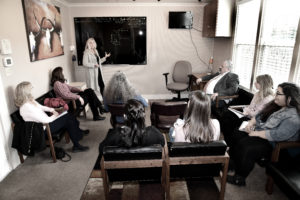 Many of the characteristics of codependency are seemingly positive traits, even sought after traits taught by teachers and parents, yet they cause the codependent person to suffer greatly.  In actuality, the traits of codependency that seem positive are actually something entirely different from what they look like.  Let’s look at the trait of caretaking.

Caring is often confused with caretaking.  Caring is a positive trait that everyone would agree is important. What the codependent believes is caring, is really caretaking, which is often destructive.  Caretaking means you try to control others actions, believing you are helping them. Caretaking enables others to stay stuck, sick, stop growing, and stops them from taking the necessary actions they need to get healthier.  A classic example of caretaking would be when a family member of an alcoholic might attempt to hide the alcohol or make excuses for the addicts behavior.  They might call work and lie for their absences. Any behavior that attempts to control, fix, manage or cover for the affected person would be codependent caretaking.

Caretaking is only one trait of codependency. Others include being overly responsible for others, focusing on others instead of yourself, controlling others, a high need for other’s acceptance and many more.

Treating codependency involves helping the codependent person understand what the condition is and then attempting to create new experiences that empower them to respond to situations and people in a healthy assertive manner. Treatment will also involve challenging destructive beliefs. This often means trying things that feel foreign to them but result in greater self esteem and sense of being grounded.  For example, saying no when it is healthy to do so, instead of always saying yes to others.